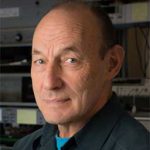 Dr. Marc Weiss worked at NIST (the National Institute of Standards and Technology--formerly NBS, the National Bureau of Standards) from 1979, specializing in time transfer techniques and statistics of timing systems, particularly applied to GPS and to telecom systems. He has over 100 publications from his time at NIST. Since January 2014 he is now a contractor for NIST, doing much of the same work. He received the NBS Applied Research Award for a first GPS timing receiver in 1983. He was awarded a patent for the Smart Clock algorithm in 1993, which optimally locks a slave clock to a master. Dr. Weiss won the 2013 NIST William P. Slichter Award, “For pioneering highly productive industry/ government partnerships to advance telecommunications and data networks through precision synchronization.”

Marc founded and has led WSTS, the Workshop on Sync and Timing Systems, annually since 1992, now a sister conference to the European version, the ITSF. Dr. Weiss is the NIST co-chair of the Timing subgroup of the NIST Cyber-Physical Systems (CPS) Public Working Group. Marc co-founded the Time-Aware Applications, Computers and Communications Systems (TAACCS) initiative, and edited the white paper and subsequent NIST Technical Note. In addition, Dr. Weiss has led the NIST program to support the GPS program office in developing their clocks and timing systems since 1980. He has worked on and published Relativity issues as they relate to GPS and to primary frequency standards. He has also specialized in Time-Scale Algorithms. He received his Ph.D. in Mathematical-Physics from the University of Colorado in 1981.