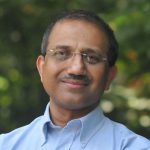 Ravi Subrahmanyan has held various roles in engineering management, product development and R&D in the semiconductor industry at Motorola, National Semiconductor & Applied Micro, and also at chip startups ECL, Immedia, Invisage and Butterfly Network. His interests are in product strategy and planning, high speed & custom design for high-performance ASICs, image & signal processing, and communications network synchronization and architectures, including non-communication applications of high-accuracy synchronization. He previously participated in ITU-T and ATIS standards bodies on topics related to timing and synchronization in communications networks, including on synchronization over packet networks. Ravi received an MBA from MIT Sloan, a PhD degree in EE from Duke University, and a B.Tech. from the Indian Institute of Technology, Bombay. He has been a senior member of the IEEE since 1997, and has 50 publications including conference presentations and papers in refereed journals. He also has 20 issued or pending patents. He has served on various conference committees, including GC & ICC since 2008, and has been involved with Comsoc’s TAOS TC since 2008, where he served as vice-chair, chaired the SAC-ANS track at GC 2012, and was a presenter on the Comsoc Webinar on Next Gen Synchronization Networks held in October 2012.

<< Back to Steering Committee listing